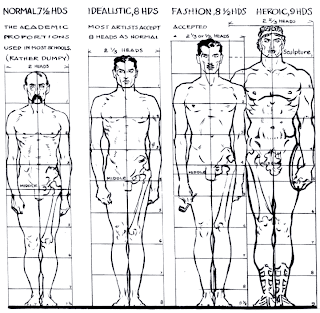 William Andrew Loomis was an illustrator, painter, and author born in New York in the year 1892. During his time, Loomis did much commercial work for advertising and magazines. Not only did he study at the Art Students League of New York under George Bridgman, another great artist, he also studied at the Art Institute of Chicago. After his service in World War I he began teaching at the American Academy of Art. It was during this period he began writing instructional books. His most well known book, a highly recommended reading for all artists, is called Figure Drawing for All It's Worth, published in 1943. Loomis has also influenced many American comic artists such as Alex Ross, the painter and illustrator for DC comics.
The above picture is a diagram of different proportions made by him, it starts off with the academic 2 heads wide and 7 1/2 heads tall body and goes on with different proportions that can be used for creating different body types  without the figure's proportions looking out of whack. This diagram can also come in handy for a character and object design class as well, unless of course your instructor wants you to draw "Big scary monsters!!" Draw it first, it helps give an even better understanding if you do it yourself.

This diagram made by Loomis is for the ideal proportions of a female. Although she is wearing heels it shouldn't be too much to subtract those out of your own work. 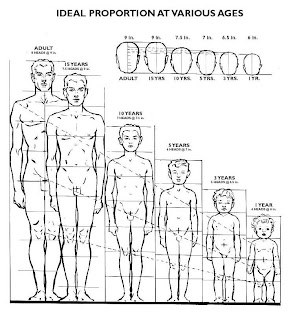 Proportions at various ages, also done by Loomis. I find it a bit disappointing that my teachers for drawing and anatomy as well as life drawing and gesture did not pass these out as hand outs. Then again there are some things we have to find out for ourselves through our own research.
Posted by kuro1145 at 2:33 PM